ADHD Symptoms and Your Child’s Behavior 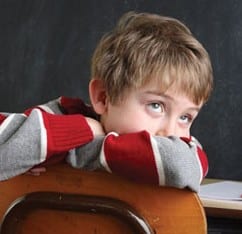 Affecting predominantly children and teens, symptoms of ADHD emerge, in most cases, before the age of seven but can continue to manifest during adulthood as well, with some variations.

Three different categories of symptoms, alone or in combination, define the neurobehavioral disorder referred to as ADHD – attention deficit-hyperactivity disorder: inattention, hyperactivity and impulsiveness, and a combination of these two sets of symptoms.

The causes of this disorder are usually inherited traits, but additives in foods, exposure to environmental toxins and maternal smoking or drug use can also favor the occurrence of ADHD signs. Although research is still being done on the potential genes that may be associated with this condition, it is known that heredity is linked with attention deficit-hyperactivity disorder.

Still, the most common trigger of ADHD remains the altered brain function or anatomy. In people with this disorder, brain activity is reduced in the areas controlling attention and activity levels. But let’s see how each type of ADHD manifests and the early signs that can signal the presence of this disorder in children and teens.

In children, symptoms of inattention are usually noticed during the first school years, while in adults these manifestations become visible at work. People affected by this form of ADHD are easily distracted by noises, events or other people who interact with them and they have a hard time sustaining attention on work or school tasks. Also, they are unable to focus on a certain task or project for a long period of time and often miss details and make mistakes due to their disorganized work habits.

People with inattention symptoms deal with procrastination and frequent shifts from one task or activity to another; also, they often leave projects unfinished and fail in completing even the simplest household chores or work tasks. These individuals find it hard to follow indications or rules in their daily activities, miss appointments or forget to fulfill obligations they accepted or promised to do.

The second category of symptoms, those defining hyperactivity in ADHD patients, vary from getting up frequently and running or walking quickly around to excessive talking or fidgeting. In children, this form of the disorder manifests through constantly being in motion, jumping or climbing as well as through difficulties when it comes to participating in sedentary activities.

Restlessness, trouble listening to stories or difficulties in remaining silent for too long and in executing tasks quietly are other symptoms of hyperactivity in ADHD patients. These manifestations are easier to recognize in children but are also present in adults, usually in the form of restlessness and the feeling of being always on the go.

The last type of ADHD symptoms affecting children and adults alike are impulsiveness symptoms. These manifest through impatience, interrupting or intruding on others, initiating conversations or activities at inappropriate moments as well as through difficulties in remaining quiet or delaying responses.

People suffering from this form of ADHD often bump into people, engage into improper conversations and blurt out answers before questions have been completed, due to their inability of awaiting their turn. While such manifestations can be present in children and adults from time to time, in patients dealing with ADHD, the frequency of these symptoms is much greater.

It is important to see a professional experienced in ADHD to have a proper diagnosis made.

Validated questionnaires are frequently used by physicians to diagnose ADHD and are usually completed by teachers, caretakers and/or the individual. More objective testing as the Conner’s Performance Test or the Quotient Test, which are used by some physicians and can be very helpful in diagnosing and monitoring ADHD treatment.

Attention deficit-hyperactivity disorder is a long-term chronic condition. It usually cannot be completely cured but symptoms can be controlled through medication and counseling. The most common drugs prescribed for this condition are stimulants, like methylphenidate or amphetamines, and non-stimulant medications, like atomoxetine or guanfacine. Antidepressants can also be recommended for children who do not respond to these ADHD medications or who deal with mood disorders as well.

About half of the children with ADHD will continue to have troublesome symptoms of inattention or impulsivity as adults. However, adults are often more capable of controlling their behaviour and masking difficulties.

Fails to give close attention to details

Does not appear to listen

Has difficulty with organization

Has difficulty engaging in activities quietly

Always “on the go,” seems

“driven by a motor”

Has difficulty in waiting his/her turn

Interrupts or intrudes upon others