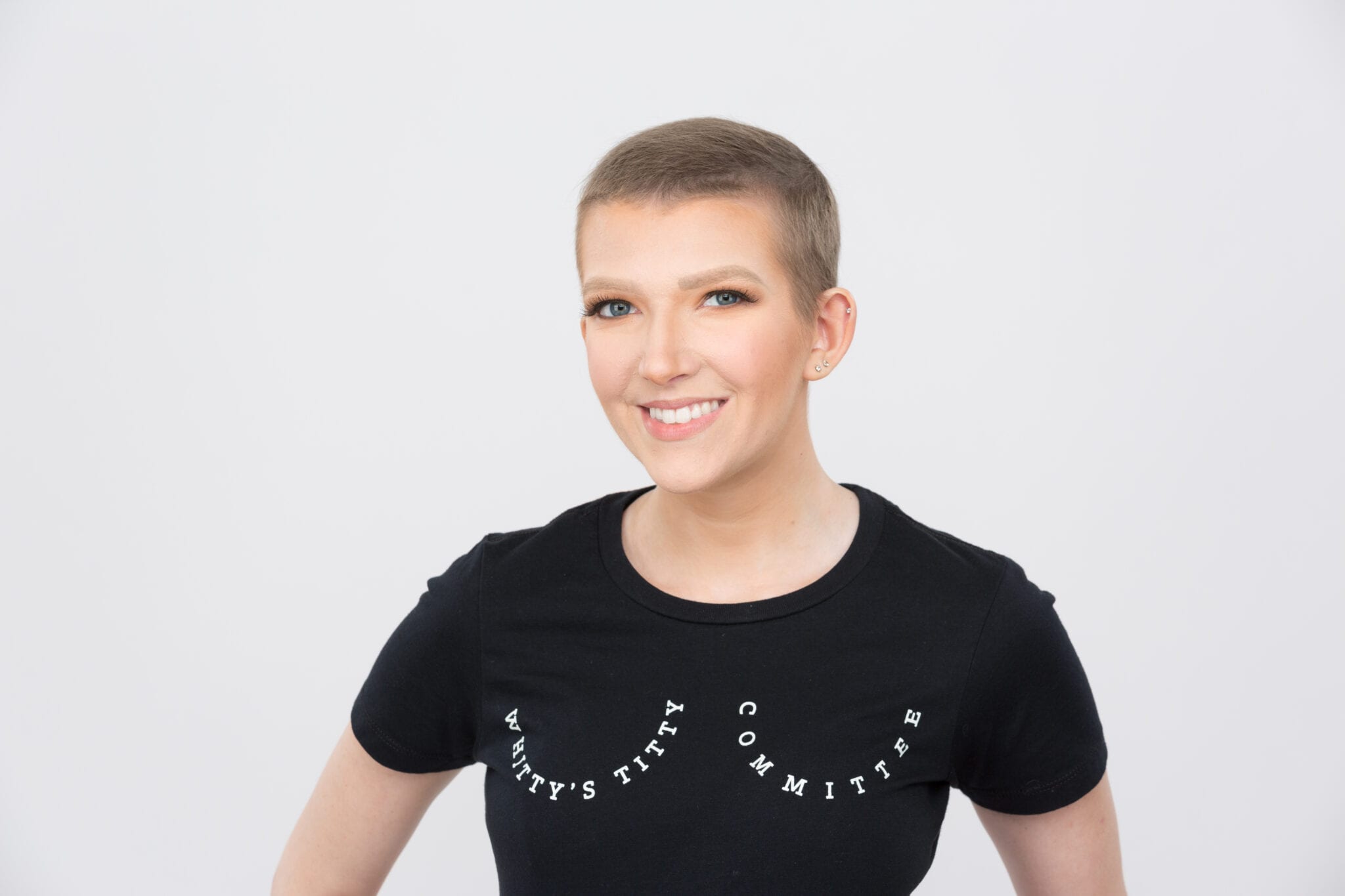 Alexandria Whitaker’s own battle with breast cancer has turned her into a champion of the downtrodden.

With her new website, Whitty’s Titty Committee, she’s taken her story and mobilized for the whole world to see that you can still glow and thrive while going through such a traumatic event. She hopes to serve as a point of inspiration for other young women who’ve been diagnosed, sharing stories and tips she learned during her Cancer treatment. This is her story.

Shortly after the start of this new year, I was visiting one of my friends for the weekend. We were getting ready to go out, and I was wearing a tank top, so I applied an adhesive bra—something I did all the time. It had only been about two weeks since the last time I wore one, but this time, I very clearly felt a lump in my right breast. I have no family history, was super healthy and in shape, and was only 24 years old, so I really didn’t think much about it and went out for a fun night.

The next morning, I remembered the lump. So I called up my friend, a nurse, and asked her about it. We both agreed that it was probably nothing, but I decided to get an appointment with the gynecologist as soon as I got home. That appointment led to a series of tests, including a breast ultrasound, which led to a mammogram and a biopsy. I was eventually diagnosed with Stage I, Triple Positive, Invasive Ductal Carcinoma.

Following my diagnosis in February, I met with a series of doctors before selecting my care team. My treatment plan including five rounds of intensive chemotherapy and a double mastectomy. When everything started out, I was super nervous and felt totally alone. I didn’t know anyone else who had gone through this, especially at such a young age! But I knew other women like me were out there and they, too, craved a support system. For that reason, along with many others, I was compelled to be open about my story and share my journey with the world. I’ve talked with local newspapers as well as national outlets and know that I am making a difference through being open, which has been the best outcome I could’ve asked for from this experience.

That must have been terrifying, coming out so brazenly while you were going through such as tough time yourself. Is there any moment in particular that inspired you to become an advocate and public face?

After countless conversations with my doctors and many of my friends, it became clear to me just how low the awareness really is that breast cancer can happen to anyone, regardless of age. Fewer than five percent of diagnosed women in the U.S. are below the age of 40, meaning the resources available for young breast cancer warriors are few and far between—but we still exist! For this reason, I quickly developed the drive to raise awareness among young women and to also create a support system for my peers near and far who are going through the same thing.

The truth is that I wish I could’ve found a blog that explained in great detail every single step of the treatment process. I couldn’t really find anything like that, which is a big reason why I decided to be as open as possible. Above all though, I wish someone would’ve told me that it’s okay to not be okay. Some days are going to suck; you’re going to want to cry; you’re going to be in pain; you’re not going to be okay. And that is okay!

What do you hope will come from this? Is there a dream you have for the end of this journey?

This experience has changed so much about me. It has, oddly, made me feel so much more at peace with myself. I love my body even though it has changed so much. I love myself more. I am stronger than I ever could’ve been without this experience. And I feel like I am so much more relaxed than before because I know what is important in life and not to stress the small stuff. At the end of the day, going through this has not only shown me that I am mentally strong but also that my body can do incredible things. I appreciate and love myself so much more now than I ever did before being diagnosed with breast cancer.

What would you recommend people do to demonstrate support for the survivors in their life?

I think the best thing people can do to support survivors is to just be there for them. It sounds simple, but the simple things are the things that I’ve appreciated the most. It can be hard to ask for the help you need, like just having someone bring you dinner, help you grocery shop, or sit with you during an infusion, but those are the things that mean the most to me!

What do you recommend people in the community do to raise awareness?

What do you think is one of the biggest misconceptions about breast cancer?

I think one of the biggest misconceptions is that you had to do something to cause cancer. Sometimes it just happens! It doesn’t matter how healthy you are or if you have a genetic link or not. Bad things can just happen, so it’s important to be familiar with your body.

Any parting words of advice?

Bad things happen in life. That’s just life. You can’t change the things that happen to you, but you can change how you react to them. So no matter what those “bad things” might be, stay strong. Nothing lasts forever and you will overcome.