Andres Sarraga: The Art of Medicine and Surgery

Andres Sarraga The Art of Medicine and Surgery

“Time I can offer surgery to patients that will do better with surgery as I know the limitations of the non invasive aesthetic devices.”

Ever since he was child, Dr. Sarraga has been fascinated by the art and medicine of surgery.His interested budded while watching his grandfather in his earlier years, but really took off when he started spending all of his summers volunteering in the operating room at the Cardiovascular Center in Puerto Rico. It was in that room where he figured this would be what he would be doing for the rest of his life. 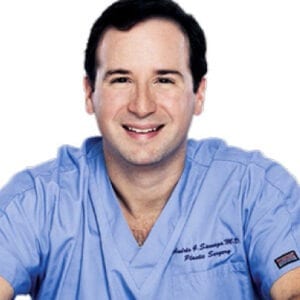 From there he went on to Chicago to get his undergraduate degree in Chemistry at Loyola University in Chicago, a city which he enjoyed but felt could not compare to living in his  native Puerto Rico. A yearning which led him to study at the Medical Science Campus University in San Juan– graduating in the top 10% of his class and acquiring admittance into the prestigous Omega Alpha Honor Society.

At the same school, Dr. Sarraga completed a full general surgery residency, where he earned an award as intern of the year. On one fateful day during his training in the Oncology department of the hospital, he got to witness, for the first time, the reconstrution of a breast. It was then that he decided that plastic surgery was his calling. Dr. Sarraga felt that restoring a woman’s sense of self  after she had undergone a mastectomy operation by reconstructing her breasts was a vitally important part of her eventual complete “cure” and recovery process.  During his last year, he was chosen among his peers as Administrative Chief Resident and soon afterwards became Board Certified in General Surgery.

From there he decided to expand his horizons and specialize in Plastic Surgery at the prestigous University of Massetchusetts in Worcester, where he became a Ophthalmic and Plastic Reconstructive Surgery Fellow. His dreams were coming alive, and there was nothing that could stop him. He blew through this internship as well, doing so well that he was voted administrative chief resident during his last year.

But that wasn’t enough for Dr. Sarraga, who loved surgery but realized that the eyes were truly his passion. Naturally, he then pursued a fellowship in Opthalmic Plastic and Reconstructive Surgery under the wings of Dr. Pascale Perusse, who one of the leading surgeons in the field.

Now he has on office with a full service surgical facility; including an in office AAAASF certified surgical suite with overnight stay, aesthetitians, 3 treatment rooms, skin care products. It is equipped with a coolsculpting room with 2 machines, laser hair removal, CO2 and fraxel laser resurfacing and non invasive skin tightening with Ultherapy.

Dr. Sarraga also offers different options for patients who are looking to look their best; some don’t have the time or do not want to go through surgery. “I wanted to be able to offer an option to liposction using non invasive fat reduction (coolsculpting) or kybella for the double chin or submental fat ;and non surgical tightening (ultherapy) rejuvenation with fillers and botox. At the same time I can offer surgery to patients that will do better with surgery as I know the limitations  of the non invasive aesthetic devices.”

On the weekends, the Doctor enjoys to go the beach and bike with his wife and three daughters. You can find him most of the time at 1935 E Hallandale Beach Blvd, Hallandale Beach, FL 33009.