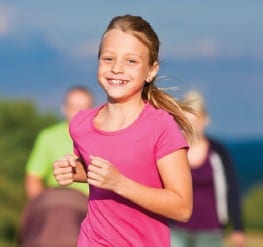 As a greater number of adults continue to venture into more active lifestyles where fitness activities, such as running, are geared towards endurance training, the appeal for kids running will develop further. In fact, running has reached new heights in popularity for kids of all ages, so now the time is right to assess whether or not we should push our kids to run long distance. Here are some answers to questions that will help you decide if long distance running is right for your child.

WHY SHOULD KIDS RUN?

As it is for adults, the list of benefits of long distance running for kids is nearly infinite. I prefer to encourage kids to run by explaining one main benefit to the parents and eventually to the child – that running is the fundamental base for just about every other sport they will encounter. If I can have kids understand that by properly developing their aerobic capacity and that they can feel better through consistent training, they will excel at other sports and we will win over that misconception that running is a punishment. At a young age, running fast for a short period of time or in several bursts is extremely natural. What isn’t easy for them to understand is that they can sustain running longer if they train themselves to do so. The other benefit is an extension of the above point, which is that there is no better way to educate our children that they can be masters of what they want to achieve.

The sport of running truly allows children to understand that they control how good they can be. This is not an easy concept to grasp if they play a team sport where the coach determines their playing time, often on the basis of size, physical maturity level and natural abilities. Running, if taught and trained properly, can be an incredibly useful tool for children that will yield tremendous long-term benefits in their lives.

HOW MUCH RUNNING IS TOO MUCH FOR KIDS?

I find that kids should be the ones to determine and communicate if they feel that they have been running or training “too much.” Kids often near that state of feeling like they are running or training too much when they have to be pushed excessively by their parents or coach. I prefer to let the child have that upper-hand and believe that they should have the power and confidence to tell their coach or parent when they have had too much.

One definite sign of kids overdoing it with running is when they enter a boredom stage. A parent or coach can see signs of the child nearing that point when excuses start coming to the forefront and the running looks like something that they are sluggishly doing and the radiating excitement has diminished. One great way to judge if a child is overdoing it is to go a day or two without bringing up the activity to see if he or she asks about doing it without a reminder from dad, mom or a coach.

I suggest combating the approach of boredom by making sure that the child isn’t doing all the running alone. Groups and teams are the best way to avoid reaching that point. The introduction of some of the popular mud-runs and obstacle races is also a way to stave off the boredom and doing too much. The events have pauses during the run that allow kids to recover a little and not to run to complete exhaustion. I am also a firm believer that giving a few goal races is a good way to keep kids from overdoing it in a way that is meaningless. A parent or coach should give kids rest after the race season passes to help them recharge their batteries.

The other factor to consider is the “training age” of the child or teen. Is this child new to athletics or has he or she participated in other sports. This will help determine how much can be handled without causing injury.

DO I NEED TO BUY MY CHILD RUNNING SHOES?

Absolutely! One important factor to address when worrying about overdoing it with too much running is that of injury prevention, and one of the better ways to avoid an injury is to ensure that your child is fitted properly for running shoes at a nearby specialty running store. The last reason you want your child to turn away from running is because of improper footwear; therefore, make the relatively small investment to properly outfit your child.

IS MY CHILD A GIFTED RUNNER?

I do believe that certain kids have physical attributes that allow them to be better runners than their peers; however, I feel that kids in general have natural endurance and with proper training they can develop that endurance further to help level the playing field. The problem arises when kids are inactive throughout their youngest years and don’t quite understand the concept of building endurance. These kids will eventually be the adults that erroneously give the excuse that they don’t run long distance because their bodies are built for short distance.

SHOULD I ENTER MY CHILD IN A LOCAL RACE?

If you want to get your child into official races, you should consider how prepared he or she is relative to the race distance. I would suggest starting off with one of the fun runs that are often attached to a larger hometown 5k road race as these tend to be less competitive and shorter distances. From that point you can search your area’s race calendar listings to identify a 5K race that seems fun and is positioned in the calendar during the cooler time of the year, which allows you to ensure that your child is ready to complete in it. Maybe consider running that race with your child. I also suggest that you do your best to encourage your child to be ready to run the entire race so to avoid the habit of walking, unless it’s really necessary.

One last point about racing. Keep the amount of races to a small number, maybe 2 or 3 per year. I often see parents who take their child to too many events and by the time the child is in high school they don’t have an appetite for joining the cross country or track team. Make running a part of your child’s life as he or she grows older but don’t make racing a way of life at such a young age.